Phillip Stearns An artist working with electronics and electronic media, based in Brooklyn, NY

Posts tagged “year of the glitch”

Just in:
Studio Visit and Interview on Creators Project
Studio Visit Interview on Periscope
Feature on Rhizome
Year of the Glitch is now accepting submissions
Seeking supporters for a chance to glitch Times Square

Inside the FujiFilm FinePix s9000

I was approached by Adam Ferriss, a Los Angeles based artist (check out his tumblr!), about some tips and tricks for circuit bending digital cameras.  His work with algorithmic image processing produces images that bear a striking resemblance to those produced by my prepared digital cameras.  The photography lab he runs at a college in LA was downsizing their inventory and getting rid of some antiquated FujiFilm FinePix s9000 cameras, and rather than throw them out, Adam decided to hang on to the lot and experiment with circuit bending them.

These things are beasts: fixed zoom point and shoot cameras with the look and feel of a DLSR but without any of the manual controls and flexibility.  No wonder they were getting rid of these things!

In exchange for  a couple of the less functional cameras, I agreed to help Adam by documenting my deconstruction process.  Bonus for you since, now I’m publishing the documentation for public consumption.

Disclaimer: If you’re going to attempt to prepare/modify/circuit bend/disassemble any electronic device, be aware that you are placing yourself at risk of serious injury or death from electric shock; electronic devices may be irreversibly damaged or destroyed (for what it’s worth, it goes without saying that all warranties will be void); if any loss of property or injury occurs, it will be solely your responsibility.

Before opening up the camera, there are a few items we need to have on hand.

You’ll also need to do the following to prepare your camera.

Now we can begin.

Remove all exterior screws.  Like all devices, there are screws in places you wouldn’t think to look.  Start with the bottoms, then move to the sides, open all compartments and look for those hidden ones. 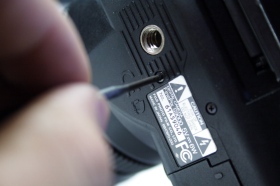 Once these are out of the way, you should be able to remove the assembly with the shutter release button and the power and other operation mode switches.  Be careful not to pull too hard, like I did, and pull the ribbon connector out of its socket.  Fortunately, mine didn’t tear, but you may not be so lucky!

There are still a few screws to be removed before you can open the back panel of the camera.  Both of these were revealed by removing the shutter release assembly.  One is right next to the strap loop, and the other is just below the flash assembly.

screw next to strap loop

screw next to flash fitting

With these two screws out of the way, you should be able to gently coax the back panel off until you encounter some resistance from a couple of pairs of wires. The red and black wires running from the hot shoe attach to a board on the main body via a connector. There’s a speaker on two black wires that attaches to another part of the circuit board via a similar connector. Disconnect these two and the back panel should open like an oven door. 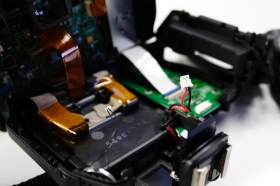 the speaker and hot shoe wires and connectors

Now that we’ve partially disassembled the camera, and exposed some nice looking innards, we need to figure out if it still works. You can either use the AA batteries or a 5V power supply with a 4.0mm x 1.7mm connector. I used to do a lot of testing for Voltaic Systems and have one of their solar rechargeable V60 batteries around for powering my small electronics projects. Make sure that the main ribbon connectors from the back panel and the shutter release assembly are in place (the speaker and hot shoe wires don’t matter), then power up your camera and turn it on. (hint: check that the battery and memory card doors are closed!) 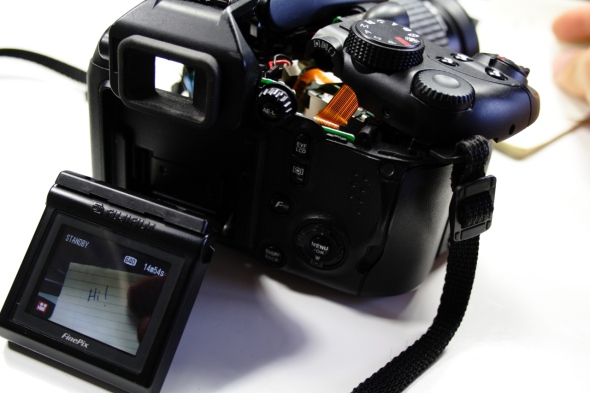 What’s Inside: Poking About

Now that we have the camera partially disassembled and still working, we can have a look at some of the components inside to see where a good place to start bending would be. Upon first glance, you’ll notice that all the parts are SUPER tiny smd. This is quite a let down, but exactly what you can expect with more contemporary devices. In fact, if you’re opening up cameras released today, you’ll probably find that most all the connections on the integrated circuits are actually underneath the chips and not via pins as with older style ICs!

So what can we mess with? There’s an Analog Devices chip (AD9996) that I can’t seem to locate the datasheet for. There’s something similar to it, the AD9995, which is a 12-bit CCD signal processor. You’ll notice too that there’s a thick connector with lots of contacts. This is the CCD connection (go figure it’s so close to the signal processor).

The AD9996 12 bit CCD signal processor is in the center with the CCD connector directly below.

I actually went a few steps further in deconstructing this camera and found that further disassembling made the system unstable. So, for now, you shouldn’t have to take the camera apart any further to tweek its brains.

How do I mess with it?

Since the pins and connections on this board are so tiny, I am hesitant to solder anything to it. One technique I always go to first is using a saliva moistened finger to poke the sensitive parts and see if anything happens. For capturing, you have two choices: movie or still. You can set the quality settings however you like. If you haven’t already inserted a memory card, now would be a good time.

Other strategies for altering the image is to use a small probe to short circuit adjacent pins on the CCD connector. I found that the right hand side of the connector worked best, and that the series of little smd ICs to the left of the AD9996 gave similar results. When I get in there with a soldering iron to draw out some of those points, I’ll be starting with the ICs and using very fine magnet wire.

So here are a few preliminary images. 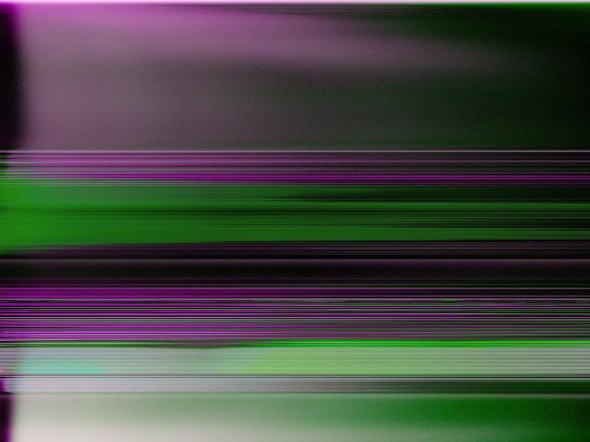 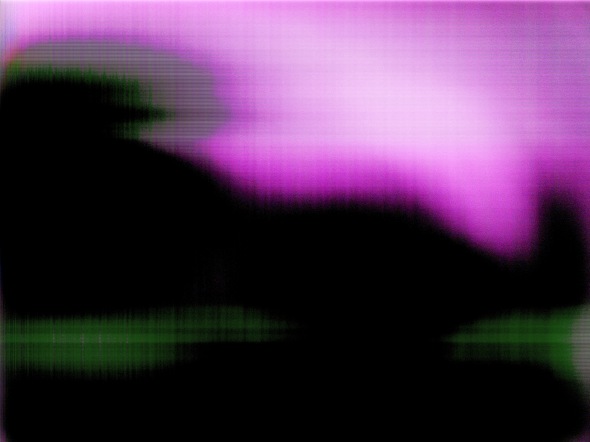 I’ll be sharing more of my findings on my year-long glitch-a-day project,Year of the Glitch.

An animation created using a collection of still produced during a session of circuit bending a Kodak DC215 1 megapixel digital camera.

Just uploaded 100+ new images to the DCP Series. This series is still well underway and is branching out into other cameras. Updates to the Olympus PIC series will be ready soon.

Be sure to check out the new additions to the Glitch Textiles project as well. There are currently nine blankets in the collection so far, each featuring a pattern woven directly from an image generated with the prepared cameras of the DCP Series and Year of the Glitch project.

Cameras of Year of the Glitch

Images and information about three cameras used in recent Year of the Glitch posts and the DCP Series are now public.  The Kodak DC280, DC215, and DC200/210, have played a key role in my exploration of hardware and software based image generation/corruption.  In the near future, these pages will be updated with more detailed information about specific techniques and circuits involved in creating the variety of images found in both the YOTG project and DCP Series.

Two new additions to the Glitch Textiles series just arrived, are pictured above. To celebrate Leap Day, I’ve created a store where they can be purchased directly from me.

Going forward, I’ll be looking into patterning some textiles from my own Dither Study series of works inspired by Daniel Temkin’s Dither Studies and featured on Year of the Glitch. If you’re not already following Year of the Glitch, do so today! The project is only 4 followers shy of 1000 and it would be really awesome to make the 1000 follower milestone on Leap Day.

Stills from a remix of For Daniel Temkin (Dither Study 3).